Description of a fire within a room

A room fire can be divided into various phases:

The incipient phase, or beginning of a fire, is dependent on the size of the ignition source and the properties of the materials and objects that are directly affected. 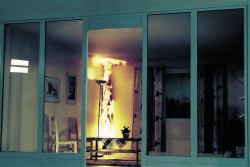 During the growth phase the fire increases in size and other objects around the fire origin will begin to burn. Even the surface linings of the walls, floor and ceiling close to the fire can ignite. Increasing amounts of smoke and heat begin to develop and a layer of hot fire gases forms beneath the ceiling.

In the growth phase the fire is local. The fire characteristics of the surface linings play an important part in the fire development.

During the growth phase flashover can occur. This is when the intensity of the fire is so great that it ceases to remain local but involves all combustible material in the room. A large amount of heat is released and flames burst out through windows and door openings.

Generally, flashover occurs once the fire gases in the room reach 500-600°C. The heat radiation from the layer of fire gases is so great at this stage that it causes all combustible materials to ignite.

Flashover can occur just a few minutes after ignition. However, it can also be delayed or avoided altogether. This could be the case in a room which has just a small amount of combustible furnishings and is equipped with surface linings that make just a negligible contribution to the fire development.

After flashover the fire reaches its maximum level and is fully developed. The length and intensity of the fire is now mainly determined by the supply of air and the fire load, i.e. the amount of combustible materials present.

The decay phase is when the fire fades out.