Improvements to the acoustics at a school in the Danish town of Kjellerup have revolutionised everyday life for Signe Nyrup Mogensen, a hearing-impaired student.

”It has absolutely transformed Signe’s life”, says her mum, Gitte Nyrup Mogensen, and Signe, who is both performing better and enjoying school more, agrees.

Signe Nyrup Mogensen is 14 years old and was born hearing-impaired. The impairment is classed as medium-level, with higher-pitched sounds causing the biggest problems. ”Without a hearing aid, my hearing is very poor”, she says.

Signe uses hearing aids in both ears, but that does not always mean that she hears well: ”In the past, I’ve had problems with classroom noise. I couldn’t concentrate and found it difficult to follow what the teacher was saying.”

A specialist speech and hearing teacher noticed the same problems that Signe’s parents had already spoken to the school about: she had difficulty in following lessons and wasn’t having a normal social life outside the classroom. Signe, quite simply, did not want to go to school.

The old ceiling design made sounds high-pitched and harsh. A dropped pen was enough to create a noise.

The measures taken have revolutionised her life. The speech and hearing teacher approached the head teacher at Thorning Skole, Lone Stig Andersen, to discuss what they could do. The comprehensive school has been considerably extended, and provides compulsory education for all students, including those with special needs. The oldest part of the school dates back to the 1960s.

”The old ceiling design made sounds high-pitched and harsh. A dropped pen was enough to create a noise”, says Lone Stig Andersen. “I have experience of working with hearing-impaired students, and was aware of the poor acoustics. When I realised how it affected Signe, I really wanted to come up with a solution.”

The local education authority and the municipality’s property management agency gave full support, and this led to a project aimed at improving the acoustics in the school, in combination with new hearing assistance equipment.

The walls and the ceiling in Signe’s main classroom was fitted with noise absorbing material, which helps to control noise and eliminates echoes. Later on, the same material was fitted in the neighbouring classroom.

The class was also given microphones, which boosted the sound picked up by Signe’s hearing aids. Speaking into a microphone has now become natural. A speaker system was installed to amplify the sound track when films were shown, for example.

Signe’s mum, Gitte, confirms that things are going much better for her daughter. She finds it much easier to follow the lessons, and understand what is being said in the classroom. “Signe’s results used to be below average but now they are above average. She has even achieved the best test results in the class. Now she is keen to go to school. The transformation is incredible!”

Signe experiences the greatest improvement during language lessons. “The English lessons are so much better. But I am also getting a lot more out of other subjects which involves a lot of discussions”, she says.

As an added benefit, teachers at the school now have a better understanding of the problems caused by hearing impairment, as have other students. Using microphones has become the new normal, but they are also more sympathetic to the challenges faced by their friends.

“Group work sessions are now so much better, even when we don’t use microphones. The others have learned to speak one at a time, to be a bit calmer and not to raise their voices”, says Signe.

It’s great not to feel tired and have a headache whenever I come home from school.

This understanding is an asset outside the classroom as well. Today, she can socialise more with her friends during breaks and activities. “It was difficult for Signe to make friends, and I am really sorry about that”, says head teacher Lone Stig Andersen. “She couldn’t participate in conversations, and would rather walk away from the group. Today, her self-confidence is so much better.” 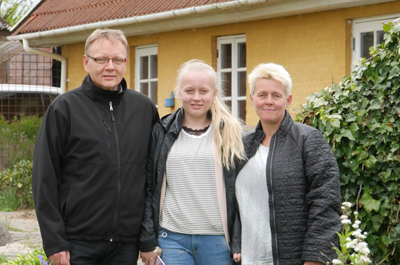 Since Signe’s schooldays have taken a turn for the better, her leisure time has also improved. “It’s great not to feel tired and have a headache whenever I come home from school”, she says.

Her parents have also noticed this change, and they have come to the conclusion that a more relaxed school gives more energy after school. Signe’s dad, Jesper Nyrup Mogensen: ”Signe has more energy left for homework. And she knows what homework she has. In the past, we often had to contact the school since Signe hadn’t heard and understood the homework instructions.”

Head teacher Lone Stig Andersen is delighted that her student has made such massive progress. “I am so pleased that Signe’s schoolwork is now going well. But even more importantly, she enjoys school and has a much better social life, mixing more with the other students.”

And if this wasn’t enough, the performance of the rest of the class has also improved, as have the students’ results. “All the students were tested before the first renovation, a couple of years ago. The measures have then been followed up through tests in various subjects. The results show that the performance of the whole class has improved. The students can concentrate better, thanks to the improvement in acoustics. As a head teacher, I am delighted with this.”

Next year, further renovations will be carried out, and Lone Stig Andersen has no doubt what the efforts should focus on:

“More areas should be adapted to Signe’s needs, and the acoustics in general should be improved. This project has been a real eye-opener. We have learned the importance of good acoustics. It is something that all children, in all schools, will benefit from.”