Ecophon and the Stress Research Institute in Stockholm conducted a unique study in a real-life office environment to examine how sound affects people in open plan offices.

The study was set up on two floors of Sundbyberg City Hall near Stockholm.

The floors were virtually identical with the same layout, furnishings and the same number of work stations with people performing similar tasks.

The ceiling was equipped with sound absorbers with Articulation Class 190.

151 employees took part in the study.

The aim was to see how the ceiling’s properties affect workers’ health, productivity and the perceived disturbance.

And the result was clear - a better sound environment significantly improves work effectiveness:

Reduction in cognitive stress refers to improved concentration capability, improved memory capability, better decision making and easier to think clear. The figures above are based on comparison from the average results.

The design of the study is unique in its kind due to the fact that:

The study was divided into three phases:

1. Preparations of the sound environment

On the weekend prior to the study, the sound environments on the two floors were changed without the workers’ knowledge:

After three weeks, the sound conditions were switched between the floors during the weekend when no employees were present.

3. Switching the acoustics back again

After three weeks, we switched back again, which meant that:

The acoustics in the work environment were measured several times throughout the study, following the guidelines in ISO 3382-3. In this way, the employees’ comfort distance was measured.

The study showed that people are strongly affected by
the sound environment in open plan offices. In terms
of comfort distance, there was a clear difference
in terms of speech spread:

The comfort distance was improved by 35% on the floor with better acoustics.

The improved sound conditions also resulted in significant findings of reduction in perceived disturbance in general. The same pattern was observed on both floors. 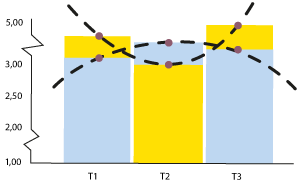 The study showed significant findings of reduction in disturbance at close range with the improved sound environment. The same pattern was observed on both floors, although to different degrees. 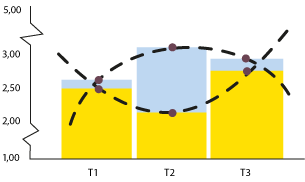 There was a significant reduction in disturbance at long range with the improved sound conditions. 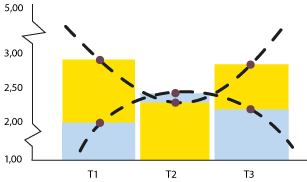 The study also showed that the improved sound conditions lead to a significant reduction of cognitive stress. 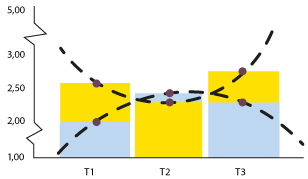 The Stress Research Institute is a national knowledge center focusing on stress reactions, sleep and health.
The Institute is part of the Faculty of Social Sciences at Stockholm University.

The study was conducted in collaboration with the Stress Research Institute in Stockholm under the leadership of Aram Seddigh, PhD, in Sundbyberg City Hall in the spring 2014. The study results were published in the Journal of Environmental Psychology in September 2015. 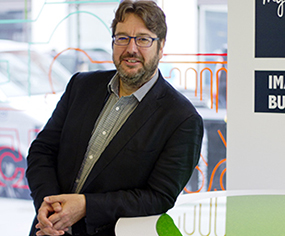 *Dr Nigel Oseland is one of the world’s leading workplace consultants. His studies of psycoacoustics shows that psychological factors have a greater effect than the sound itself.

For this reason, sound environments and the effects of changes made in a room must be studied in real office environments.

Otherwise the study risks missing the factors that have the strongest effect.