Visual appearance and light highly impacts the overall look and feel of a room.

According to DIN 5036 measurements, practically all reflected light (99%) hitting Ecophon ceiling tiles in white and light colours, is diffuse. The surface layer of the tile has contributed to scatter light in a wide range of directions.

Another property of surfaces which is important to control is gloss. It translates into a single value (for a given angle of incidence of the light) the glossiness of a surface, meaning to what extent the surface will reflect impinging light without scattering it.

Gloss is always related to a certain incidence angle (e.g. 20°, 60° or 85°) and does not describe how evenly the reflected light is distributed in space.

The surface roughness and the type of surface coating have a strong influence on gloss. The gloss of an Akutex™ FT surface is below 1, whereas the gloss of black colored glass equals approximately 100, and the gloss of a pure mirror 2000. 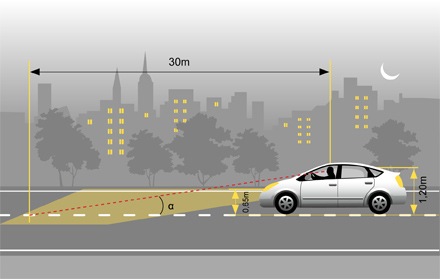 Commonly used descriptors (Light Reflectance Value and Gloss) do not explain the total experience of a ceiling surface. The retro diffusion behavior of the surface helps to complete the picture. Retro diffusion is for example used as a descriptor to characterize road paints.

Safe night driving requires that one sees the painted lines on the road. Assumed that the main source of light are the lights of the car, the critical factor is how much of the light projected forward by the car lights is reflected back to the driver. The so called Retro-Reflection Coefficient is described in the standard EN 1436.

More generally, retro diffusion characterizes the way a surface will appear when lit at quite low incidence angles, seen from different positions. For ceilings, it is measured at a range of 30°, both in a vertical and a horizontal plane. For both situations, the light beam is static and only the eye is moving.

For the horizontal measurement, the amount of light seen by the eye is measured along the green circle. For non-oriented surfaces, it is sufficient to conduct the measurement on one half of the circle.

The results are presented as a graph of light intensity as a function of the angle (from 0 to 180°) between light beam and viewing direction.

“0”corresponds to eye and light source at the same position. “180” corresponds to eye and light source in opposition with each other. A surface with a lambertian reflection (i.e. diffusely reflecting, the apparent brightness of a Lambertian surface to an observer is the same regardless of the observer's angle of view) pattern will show a horizontal, straight line (in black on the graph to the right).

For the vertical measurement, the amount of light seen by the eye is measured along the black circle segment, ranging from 30° to 150° out of a half circle.

On a graph presenting light intensity as a function of the angle between the viewing direction and the surface, will typically show a bell-shaped curve having its top for a position of the eye perpendicular to the surface. A surface with a lambertian reflection pattern will display a cosine (black curve).

Akutex FT™ surface has a rare characteristic, in the sense that it reflects slightly more light back to the lighting source than forward. In that sense, it behaves like an ultramatt surface.

If the ceiling shows a good retro-diffusion, meaning that the curve for the horizontal measurement is flat and the curve for the vertical measurement is close to a cosine, there will be no difference in how the surface appears when moving around in the room. Whatever the relative position of the viewer to the window, the ceiling will present the same white, crispy visual characteristics.

Also, a good retro diffusion will not pick up colours from the outside or from adjacent walls. It will contribute to what can be called the visual integrity of the ceiling.

In conclusion: for a ceiling surface, a good retro diffusion, close to lambertian distribution is positive, as being homogeneous and controlled. But for a rich room experience, the room should also be fitted with directional light accents, in order to provide a directional aspect of light, as we are used to experience outdoors.