Everyone is different. Schools need to eliminate barriers such as walls and frontal teaching that hinder the development of pupils and teachers, says Mie Guldbaek Broens, an educational anthropologist and speaker on activity-based learning. “We need to create an inspiring, transparent and collaborative learning environment in schools.” 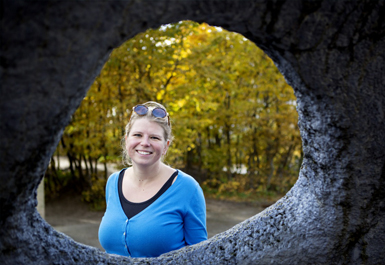 Mie Guldbaek Broens began her career as a teacher but soon found her true calling as an educational anthropologist, travelling the world as a consultant on the development of schools. Starting out as a teacher, she was stuck in a classroom with her pupils. She would send the pupils out of the room to use the corridors and library for discussions and group work. Mie’s colleagues soon started to complain that her pupils were disturbing other classes. This was completely at odds with Mie’s passionately held belief that children learn by actively working on issues themselves, rather than by listening to someone instructing them.

“Teaching focuses on delivery by the teacher. I believe we should focus on learning by the pupils. Because everyone is different, the teacher has to be able to adopt different methods for different pupils.”

This approach changes everything when it comes to the appearance and organisation of schools. All the old stuff has to be literally torn down: both physical barriers such as walls and doors and mental obstacles such as the notion that teachers should work alone with their class.

If pupils are to play an active role, rather than just listening and writing, the premises must be suitable for a variety of activities. Some pupils may need to make phone calls, some may be working online, and others may be having a group discussion or tackling a purely physical task.

“For this to work, teachers have to collaborate. But how are they meant to do that if they are each in their own classroom?”

Mie Guldbaek Broens talks about activity-based learning. An open-plan layout, coupled with smaller work rooms, provides transparency for everyone – teachers and pupils alike. Teachers can assign pupils to activities according to their needs and abilities.

“If there are multiple adults in the same room, you can leave the independent children in the care of one adult, allowing one or more of the other adults to focus on the children who need extra help and support. Meanwhile, the teachers can continue to help each other out.”

Collaboration among teachers – team teaching – is a key concept for Mie Guldbaek Broens. According to TALIS*, a major study by the OECD, collaboration is essential to teachers’ job satisfaction and motivation.

“Teachers are used to delivering instruction on their own in the classroom, but team teaching comes naturally to most of them if they are placed in a physical setting that encourages it.”

Nevertheless, Mie recognises the difficulties in creating a culture, a learning environment, that facilitates collaboration.

“You have to create a good environment, both physically and mentally, as part of a culture with a clear direction. That’s asking a lot of the people who work in a school. But if you succeed in creating a culture that the teachers buy into, everyone will become an enthusiastic participant.”

Acoustics a key factor in an open learning environment

When barriers such as walls and doors are removed, acoustics become a challenge. The whole point of the open learning environment is to have multiple people moving around, talking and working in the space. So acoustics are the first thing that Mie Guldbaek Broens looks at once her clients have agreed to an open-plan layout.

“If we want teachers to work as a team and pupils to talk a lot, we first have to create the right conditions. We shouldn’t have to change or adapt our educational methods on account of a poor acoustic environment.”

On the contrary, the space should be adapted to the educational methods. Mie advocates diversity rather than flexibility. Rooms should not be designed so that they can be adapted to various activities. Instead, teachers and pupils should be able to move to a room, or part of a room, that is already suited to the activity in hand.

“This leads to better collaboration and introduces an element of mobility.”

Observation instead of measurements

For Mie, as an anthropologist, the natural way of evaluating a school environment is by observation. Acoustic measurements can provide indisputable evidence that the acoustic environment has been improved – up to a point. But when the number of absorbents that eliminate low-frequency noise is increased from an already high level, the measurements will register little change, while the margin of error is large. However, by observing the behaviour of teachers and pupils, Mie Guldbaek Broens can identify big differences resulting from marginal improvements in the acoustic environment.

“We can use simple measures like counting the number of times the teachers shush the children. At Collegi Montserrat in Barcelona, after we further increased the amount of low-frequency absorption alone, there was noticeably less shushing.”

“Every time a child is shushed, they feel like they’ve done something wrong, which impairs their ability to learn. Less shushing has a positive effect on pupils.”

Mie Guldbaek Broens runs a consulting firm, LOOP.bz, in partnership with her father, the architect Jens Guldbaek. Working on various school projects was what started her on her career path as an educational anthropologist.

“The knowledge I acquired came from observations, not from books. But eventually I realised that I needed the theoretical knowledge as well.”

Mie found a course in educational anthropology at the University of Aarhus in Denmark, where she recently completed her master’s degree. A glance at her CV shows that anthropology was the natural choice for someone who has spent her life travelling and working all over the world. Mie has visited every continent except Antarctica.

“When you travel a lot, you develop an open mind. You get to see how other people live, and you begin to question what’s “normal”. I’ve seen a great deal, which gives me a broader perspective.”

Education and the opportunity to work with people who want to help other people is what motivates Mie Guldbaek Broens.

“Working with children is the most important job in the world. I believe in creating the best possible conditions for teachers, which they don’t have at present.”

Unlike many evangelists for a cause, who often find themselves rowing against the tide, Mie Guldbaek Broens finds there is great interest worldwide in learning environments and activity-based learning.

“This stuff is relatively new, and only now are we able to observe its effects in the real world. It’s like a steam engine that is slowly, gradually picking up speed. Schools have been using teaching as a method for 200 years, but now the trend is increasingly moving towards learning. If we can get the architects to understand the acoustic aspects and the education authorities to fund it, we’ll make a lot of progress.”