A wave of renewal is sweeping Finnish schools up and down the country, with hundreds resorting to temporary facilities whilst the renovations and construction work are underway. A temporary school set-up was brought to life in a Lappeenranta shopping centre for more than four hundred Kesämäki School pupils. 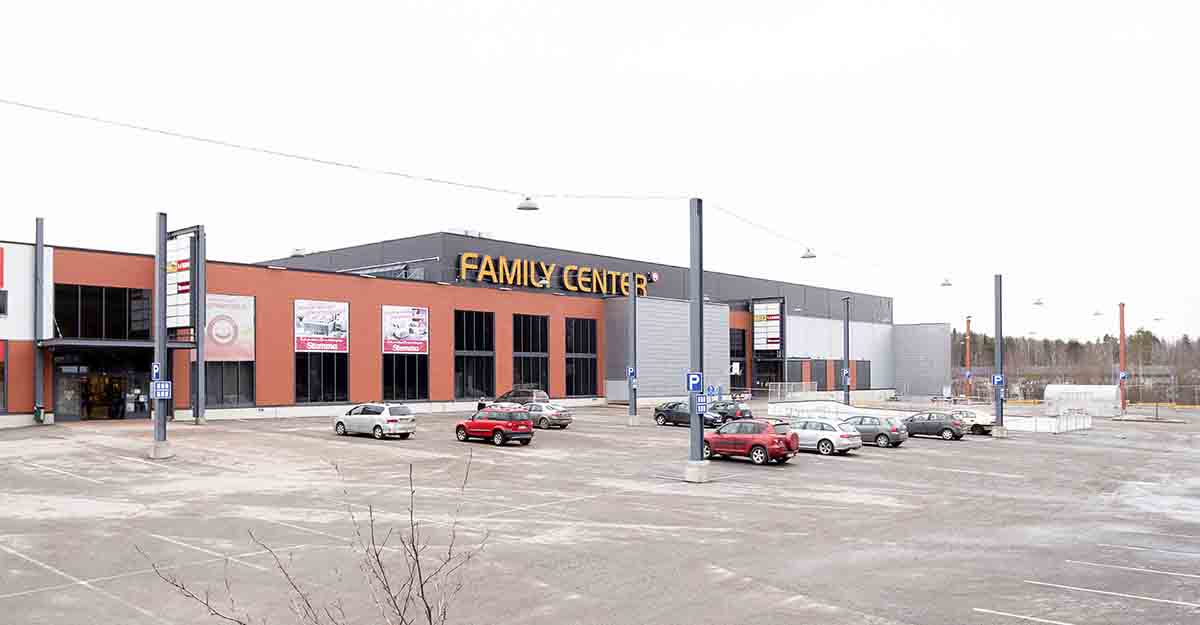 Lappeenranta-based Kesämäki School’s upper school pupils will be studying in temporary facilities for the next twoacademic years, whilst extensive renovations are carried out at their school. Somewhat unusually, sufficiently-sized facilities ended up being found in a shopping centre. Learning spaces to accommodate 400 pupils were built in the 5,000 square metre facilities of the Family Centre shopping centre, which had long been almost empty.

Kesämäki School is one of the largest in Lappeenranta. Of its 760 pupils, 400 upper school pupils are currently studying in the temporary facilities.

This unusual space was chosen when no other suitable venue for temporary, prefabricated school facilities could be found. The availability of such temporary facilities, the indoor air risks and costs led the school to look for other alternatives.

“We were at risk of moving to up to three different temporary facilities in different parts of Lappeenranta. The shopping centre offered the best solution from our perspective,” explains Headmaster Petri Huovila of Kesämäki School.

The whole school, complete with chemistry, art and technology classrooms, was built within the shopping centre during the summer. The open retail space was divided into classrooms with 2.7-metre-high Ecophon Akusto™ Wall screen panels. There are now a total of 25 learning spaces across two floors.

“It is rare that you have the chance to build a full-scale sports hall in temporary facilities. However, the 500 square metre storage space here allowed us to do just that.” 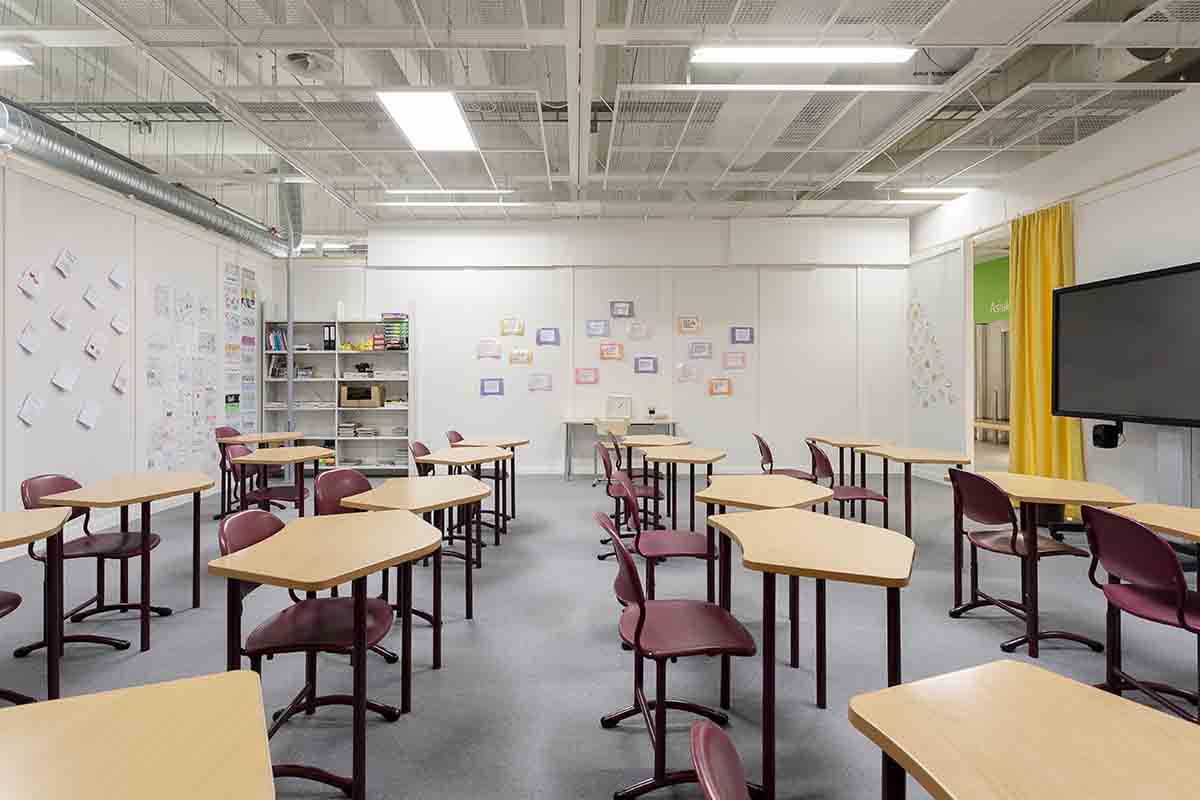 Challenges at ceiling height
In the autumn, when the school opened in the temporary facilities, staff and pupils began to experience problems with noise; for fire safety reasons, the partition screens did not extend all the way up to the ceiling, leading to sound bouncing off the ceiling and back into the learning spaces.

“The sound carried from one space to another, causing disruption and distraction – a maths class might end up interrupting Swedish listening exercises. You had to raise your voice so that everyone in the class could hear – this, of course, meant that those in the neighbouring rooms could hear you more clearly, too,” recalls Kesämäki School teacher Roosa Huopalainen.

According to Ecophon Concept Developer Pauli Pallaskorpi, it was to be expected that premises designed for completely different purposes would not be directly compatible as a learning environment.

“This is a unique site – presumably the first school in Finland to be built in a shopping centre. This also posed challenges for acoustics design,” says Pallaskorpi.

Problem areas were resolved one at a time when it came to acoustics in the spaces, through close cooperation between school and designers. Suspended Ecophon Solo™ Baffle acoustic panels were hung above the partition screens, improving sound absorption in the tall space.

A light ceiling was installed as an additional solution for some of the teaching spaces, with ventilation channels and sprinklers running through it. The new ceiling prevents sound spreading between spaces.

“You can really notice the difference – the rooms now support quality teaching rather than hindering it. I feel like I can work well now,” elaborates Huopalainen.

In addition to the wall and ceiling surfaces, a wide range of different acoustic solutions and materials were used in the spaces: carpets, acoustic curtains, and suspended acoustic panels in high spaces.

“This open and unusual teaching space works, as real investments have been made in its acoustics,” emphasises Pallaskorpi.

Collaboration facilitates optimal acoustics
Thanks to the new curriculum, studies are now more interactive and varied than before. This also requires more spaces and acoustic adaptation to the new school culture.

“Schools today see a lot of group work, discussion and studying through a range of means. Increased interaction also increases noise levels, which needs to be addressed in acoustic planning,” explains Pallaskorpi.

Often, people only look at acoustics when there are issues. Huopalainen states that having to work in noisy spaces takes a noticeable toll on how teachers and pupils cope, as well as leaving them tired at the end of the day. Headmaster Petri Huovila and teacher Roosa Huopalainen both state that the modifications carried out have allowed them to return to normal everyday life at school. 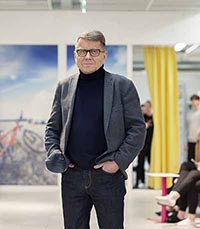 The acoustic issues experienced in the autumn have led to discussion more widely in other schools in Lappeenranta.

“It’s often simply assumed that certain spaces are just going to be noisy. But it doesn’t need to be like this – for example, the canteen built in our temporary facilities has proven very successful from an acoustics perspective, with noise levels even quieter than those of a normal school canteen,” says Huovila.

Pallaskorpi is also pleased with the final outcome. The success came about as the result of the combination of many factors: acoustics expertise, experiences of the users of the space, architectural plans, and a shared desire to overcome the challenges were all needed.

“The City of Lappeenranta and the school’s headmaster both wanted to improve acoustics in the facilities and overcome the challenges with cooperation that flowed as smoothly as possible. We also learnt a great deal here, too,” says Pallaskorpi gratefully.

It’s often simply assumed that certain spaces are just going to be noisy. But it doesn’t need to be like this.

The school was built in an empty shopping centre, almost from scratch. In just over a year, the space will be emptied once again, when the school moves back to its own, freshly renovated facilities. However, this will not be a single-use solution, as the materials used in the temporary facilities will be available for reuse at Kesämäki School.