The word itself is taken directly from the Latin 'color' combined with the Anglo-Norman 'culur'. It's a noun used to describe the spectral composition of visible light (itself a definition of electromagnetic radiation which we can see) and in its plural can be used to classify a particular set of spectral compositions.

Colour as we consider it comes from the perception of visual properties of light and how it interacts with the spectral sensitivities of light receptors in our eyes. Different colours carry different distribution of light energy in a variety of different wavelengths. Our eyes contain areas of cone cells of varying sensitivity which respond to stimulation from different parts of the spectrum, in turn conveying this information to our brains.

How can we describe colours?

NCS is based around six elementary colours, pure colours which can only be perceived and described as 'themselves'. White, black, yellow, red, blue and green. In their purest form there is no other way to describe their appearance.

The notation is based on how much of a resemblance a colour has to the six NCS elementary colours. When the NCS system is known, it is possible to judge the attributes of a colour by its notation. For example: how much blackness, how much chromaticness, and what hue? This helps to communicate and check specifications and to identify colours. The NCS notations describe the visual properties of the colour and have nothing at all to do with the mixing of pigments or reflection curves etc, which vary from manufacturer to manufacturer.

How to recognise colour accuracy, what is Delta E?

Our colour vision is very logical in its make up, our eyes don’t deceive they perceive. The visual appearance, i.e. how the colour looks, is the most important and true way to judge colour especially as we evaluate the entire surface including colour, gloss, texture, size etc. However as colour vary depending on viewing situation, illumination, texture and personal preferences etc there is a need for standardised “objective” means of measurement.

The main unit for calculating colour differences between two colours (which should match) is Delta Lab. It is the difference for each of three dimensions in the measurement colour space. Most commonly used is Delta E (∆E), which is a mathematical summary of the three values L,a,b (L = lightness; black/white, a = green/red, b = blue/yellow) and supposed to indicate the composite picture of the total colour difference. Ideally, the ∆E is a perceptual indication of the size of the visual colour difference between two colours. It is the best means of technical assessment known today.

The values received is on a scale which starts at 0, where ∆E = 0 stands for no perceived difference at all. At approximately ∆E 0,2 - 0,3, the difference starts to be visible. Often a Delta E 1 has been regarded as a commercial match.

What can Ecophon guarantee?

As in all industrial processes there are variables such as the paint, the degree of coverage, the porosity of the surface, the drying process etc. that affect the colour of the surface. Despite these variables Ecophon can guarantee that the Texona and Akutex FT surfaces will achieve the closest NCS, and have a colour difference, Delta E, from this ≤ 1.

The illustrations below show what the colour difference Delta E ≤ 1 means. First, the whole colour sphere shows where the shade NCS S 1050-Y90R is located. 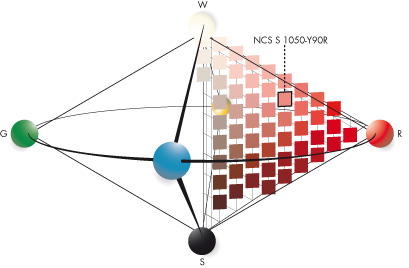 A vertical cross section of the colour sphere shows NCS S 1050-Y90R and the tolerance area around it. 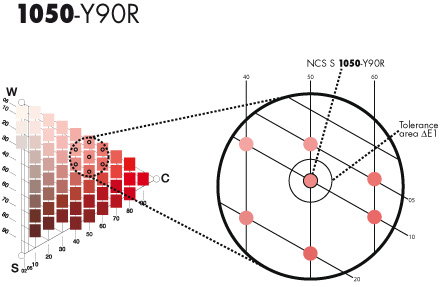 A horisontal cross section of the colour sphere shows NCS S 1050-Y90R and the tolerance area around it.